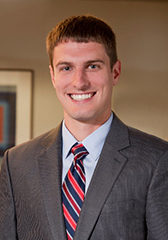 Jason is a New Hampshire native. He grew up in Londonderry, NH and graduated from the University of Hampshire in 2010 with a Bachelor’s of Science degree in Business Administration with concentrations in Accounting and Management.

Jason joined Howe, Riley & Howe in 2010. Jason’s audit and accounting work is focused on non-profits, real estate, and professional service industries. He also provides a wide variety of tax services and advice to individuals as well as small and large business alike.

Jason has been active in the NHSCPA since he graduated in 2010. He has focused his energy on the NHSCPA’s Young Professionals (YP) committee which he has chaired since 2014. The YP committee hosts networking events for the NHSCPA’s young members, offers student mentoring, and partners with NH Jump$tart to tour New Hampshire high schools. Jason is also a graduate of the NHSCPA Young Professionals Leadership Program, class of 2013.

Jason is a Director and active member of the Queen City Rotary Club focused on serving Manchester’s youth. The club hosts two major fundraising events each year, through these events the club is able to raise funds to support over 25 local charities.

Jason currently resides in Manchester, NH with his wife and two dogs Renegade and Breaker. In his free time, he enjoys traveling and trying new food, boating on Lake Winnipesaukee, and being active by running road races (completed two marathons).